Coronavirus’ attack on the markets

For investors the last couple of years may not have made comfortable viewing. As Brexit negotiations, Prime Minister changes and elections took their toll, it was easy to feel like we were stuck in the middle of an extreme version of the hokey-cokey. At the same time, other global events were going on such as the stand-off between Trump and China, causing additional volatility in different markets.

And now, we’re seeing the markets come under attack from the threat of the Coronavirus outbreak. As we write this, it goes without saying that our sympathies are of course with those who have been affected or indeed know someone who has, but unfortunately in our line of work we do have a duty to consider the potential investment impact of the outbreak too, and that is the aim of this article.

How does Coronavirus impact the markets?

In simple terms, as the virus spreads (as it already has gone from for example beyond Asia and increasingly into the Middle East and Western Europe), corresponding ‘lockdown’ measures from the authorities, which are of course economically-disruptive, also soon spread.

This is particularly problematic for businesses which rely on complex global supply chains, as this raises the chance that at least part of their operations will be affected. The good news is that for many firms this will be a short term ‘blip’ and you would expect a rebound in activity to make up the vast majority of lost output once the outbreak is under control. As an example, movement restrictions may mean that someone in the market for a new car is unable to visit a dealership for a while, but they are highly likely to pick up their intention to purchase when they can.

Consumer services firms however may not be so fortunate. If we consider someone who goes out for a meal once a month, it is unlikely that they will make up for lost time once virus restrictions are removed. These sort of firms, thus will take longer to recover.

Should I be worried about my investments?

There are always factors/news impacting the value of the markets. Currently it is the Coronavirus. As mentioned earlier, we have experienced Brexit and the US-China trade deal. If we look back further the markets have survived many other events including the global financial crash in 2008, 9/11, the Cold War and even two World Wars. The markets have also survived other recent outbreaks including SARS and Ebola. The one thing that can be said about the markets is that they are resilient!

The key with all these scenarios is to remember three pieces of advice:

Great advice, but what does it actually mean for my investments?

In the short term it means your investments may temporarily fall. This is perfectly normal in a situation like this. However, once the markets have settled and the media driven sentiment has diminished, we would hope to see the markets recover. Whilst we can be fairly confident that will happen, the one thing we can’t predict is how long that will take.

This is where the second piece of advice (the importance of remaining invested in the markets) comes into play. The interesting thing with investing is that the issue is not so much being invested during a falling market, but rather being out of the market when it recovers. If we look at the FTSE 100, over the last 20 years the best 10 days of the FTSE 100 have come within 2 weeks of the worst 10 days1. Had you exited the market when values fell, not only would you have taken a loss, but you would have also missed out on the recovery.

This is true, even in the most extreme circumstances. In 2008 for example, following the global financial crash the FTSE All Share Index fell by over 40%:

However, from reaching the above low point in March 2009, it then delivered a return of approximately 65% over the following 12 months: 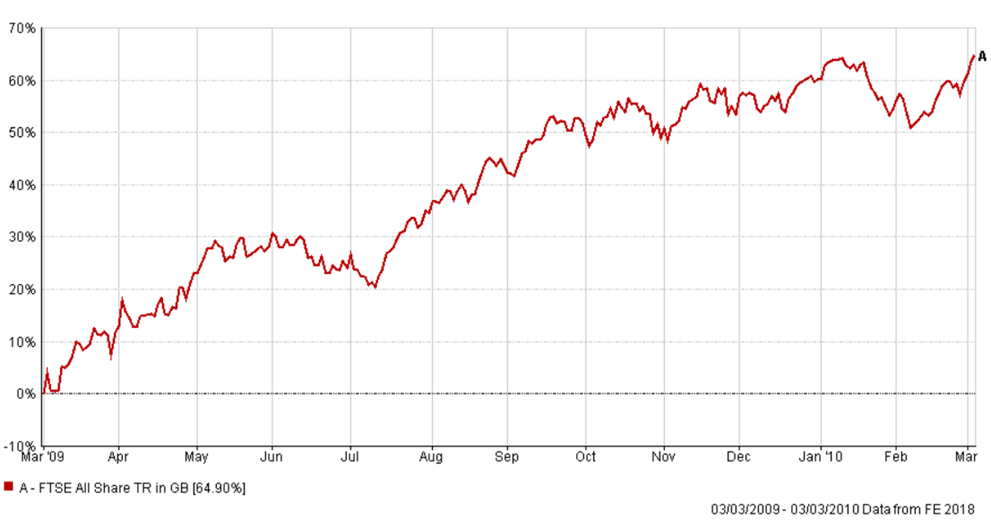 As we write this (28/02/2020), the FTSE 100 has fallen approximately 10% since the start of the year. Whilst making great headlines, the current situation is nowhere near as bad as what happened in 2008, and as shown, that didn’t work out too bad for those who remained invested.

To help further emphasise the point about the importance of staying invested, here is a chart that looks at the return you would have received if you would have invested £10k into the MSCI World Index over a 25 year period. Those who would have remained invested throughout would hold an investment nearly four times the value of those who missed the 25 best days… 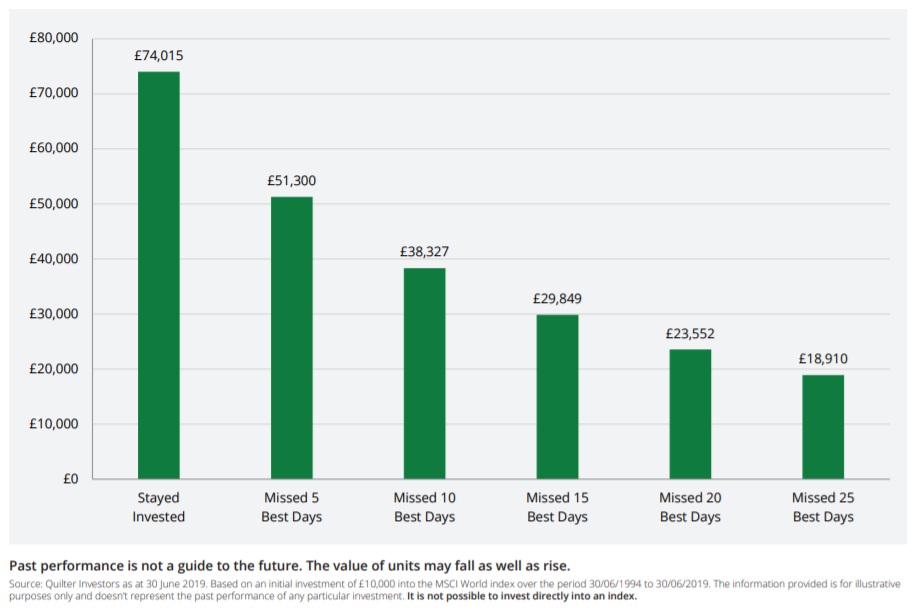 The other factor to consider with our investment portfolios is that we utilise diversification (the third piece of advice) when it comes to selecting assets. We aim to build portfolios utilising a blend of different asset classes and sectors, meaning that whilst one asset may fall in value, another may potentially rise.

It goes without saying, when it comes to investing none of us have a crystal ball. What we do however is make educated decisions as to what we think will happen and ensure we are best positioned to take advantage of whatever might happen.

Whilst Coronavirus might be impacting markets now, there are other events happening around the world that will be having a positive impact and will be driving values up.

It might have been a bit of a joke in Dad’s Army, but Lance Corporal Jones was right: Don’t Panic. If anything, now is the time to look for good investment opportunities.

What he meant by this was that the fear of war or bad news creates uncertainty and panic, driving down stock valuations and thus the price of investments. When the signal of war is over or good news is sounded, uncertainty and risk reduces, and optimism drives prices back up.

In closing, whatever happens with the markets as a result of Coronavirus, there will be investment opportunities.  We have managed our portfolios to ensure we are positioned best to withstand the storm and to take advantage of the returns. Our investment philosophy is based on a global outlook and the long term view. Don’t panic!

The value of an investment and the income from it could go down as well as up. The return at the end of the investment period is not guaranteed and you may get back less than you originally invested.

This website uses cookies to improve your experience while you navigate through the website. Out of these cookies, the cookies that are categorized as necessary are stored on your browser as they are essential for the working of basic functionalities of the website. We also use third-party cookies that help us analyze and understand how you use this website. These cookies will be stored in your browser only with your consent. You also have the option to opt-out of these cookies. But opting out of some of these cookies may have an effect on your browsing experience.
Necessary Always Enabled
Necessary cookies are absolutely essential for the website to function properly. This category only includes cookies that ensures basic functionalities and security features of the website. These cookies do not store any personal information.
Non-necessary
Any cookies that may not be particularly necessary for the website to function and is used specifically to collect user personal data via analytics, ads, other embedded contents are termed as non-necessary cookies. It is mandatory to procure user consent prior to running these cookies on your website.
SAVE & ACCEPT